While growing up in the Chicago suburb of Lombard, Linda Shaver always knew her life would be about music. She started taking piano lessons at age 4 to follow in the footsteps of her big sister, and by age 5 she was writing her own pieces for school competitions. When she was 9, she started taking viola lessons and decided she wanted to become a performer. This led to playing in the Protégé Philharmonic as a teenager, eventually becoming the principal violist. 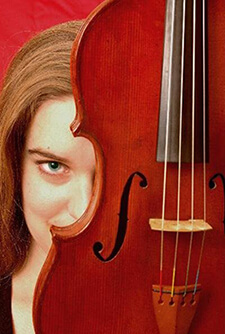 Linda attended Lawrence University and Roosevelt University's Chicago College of the Performing Arts, earning a Bachelor of Music degree in viola. All the while, she honed her writing skills—at Lawrence, she won the university's Freshman Studies writing award and became a writing tutor in her sophomore year. During her senior year at Roosevelt, she won the American Viola Society's David Dalton Viola Research Competition, publishing her first article in that society's journal.

In 2005, Linda (now Shaver-Gleason) moved to Southern California to study viola with Helen Callus. While working on her master's degree at the University of California, Santa Barbara, Linda taught music theory to non-music majors for two years, learning how to communicate complicated musical concepts to students with little musical training.

Professor Callus encouraged Linda's writing talent by asking her to provide program notes for her recitals, an opportunity that sparked Linda's interest in public musicology. These notes caught the attention of the Santa Barbara Chamber Orchestra, who commissioned notes from Linda for the 2009-10 season and has continued to work with her ever since. Professor Callus also asked Linda to give an informative talk for her performance of Bach's sixth cello suite, which led to pre-concert talks for the Santa Barbara Strings.

Linda received her Master of Music degree in viola performance from UCSB in 2009, also winning the Stanley Krebs Memorial Prize in Musicology and the Robert Chapman Prize in Music Theory. By then she realized that she was more suited to writing and teaching about music than performing it publicly. So, she began studing Musicology at UCSB, working with Dr. Derek Katz and earning her PhD in 2016. Linda taught music appreciation for two years, making classical music accessible to students with a wide range of prior musical knowledge. She also taught music history to music majors as well as first-year academic writing. Linda delivered papers at academic conferences around the country, including two presentations for the American Musicological Society.

Linda specializes in reception—the way audiences assign meaning to the music they hear. This informs her work as a program annotator, making her aware of how the written word shapes the listening experience. Linda's dissertation examines the presentation of Felix Mendelssohn in music history books published in Victorian England, demonstrating how their description of the composer and his music reflects larger debates about historiography, taste, nationalism, and the role of music in society. In addition to reception and public musicology, Linda's research interests include 19th century instrumental music, women in music-making, and 15th century masses (due to private study with Dr. Alejandro Planchart).

Linda currently lives in Southern California with her husband, Chris, and her son, Linus, where she writes program notes for arts organizations across the country. She also writes the blog Not Another Music History Cliché, which critiques published writing on classical music and debunks historical myths.